At the beginning of March I spent a day and a half at Middle Creek Wildlife Management Area in Pennsylvania, approximately a 2.5 hour drive from my home near Baltimore. This was my first visit to the area. I could not resist packing up my camera gear and heading north when a friend from one of my photo workshops sent me a great image she had just taken at Middle Creek of a huge flock of snow geese taking off from a farm field.

Many years ago, 40,000 snow geese visited Chincoteague National Wildlife Refuge in November.  I recall one afternoon during one of my photo workshops, while driving the Wildlife Loop we encountered thousands of snow geese in the impoundment and near the road. Periodically they would rise in unison from the ground sounding like a plane taking off.  They would fly overhead, circle, and return to the same spot that they had left. Not only did they do this once, but repeated the behavior several times more.  I have never forgotten that day.  But in recent years the number of geese at Chincoteague has dropped dramatically.  Many are now spending the winter at Bombay Hook and Prime Hook National Wildlife Refuges in Delaware with the geese feeding in the fields of the Delmarva Peninsula.  It is reported, seasonal counts have exceeded 200,000.

At Middle Creek,  I was a reminded of the past scenes at Chincoteague but with even more birds.  During my visit on March 4th, there were 78,000 snow geese present with nearly 3,000 tundra swans.  Periodically, the number of birds present in the winter were as high as 200,000. 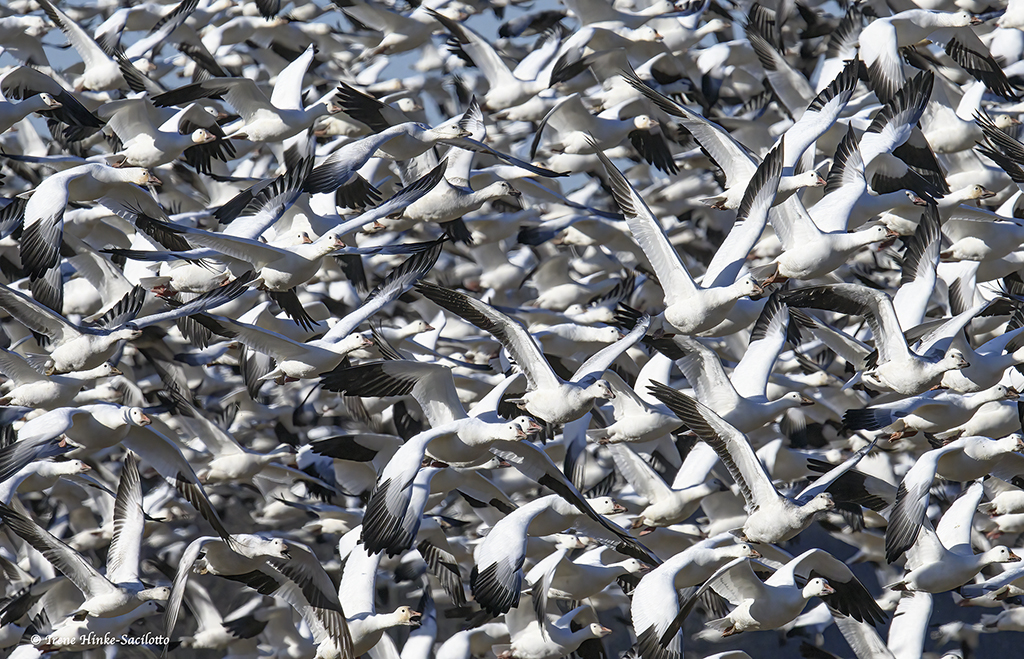 Middle Creek Wildlife Management Area is located on the boarder of Lebanon and Lancaster Counties in Pennsylvania, north of the town of Lancaster in the middle of Amish Country.  Middle Creek is operated by the Pennsylvania Game Commission which is in charge of managing the wild bird and mammal populations at Middle Creek. This roughly 6000-acre wildlife management area is home to hundreds of species of birds and mammals. It is crucial for the hundreds of thousands of ducks, geese, and swans that visit during their spring and fall migration.

A number of accommodations are available approximately 20-25 minutes from Middle Creek at the towns of Ephrata and Lititz, PA. 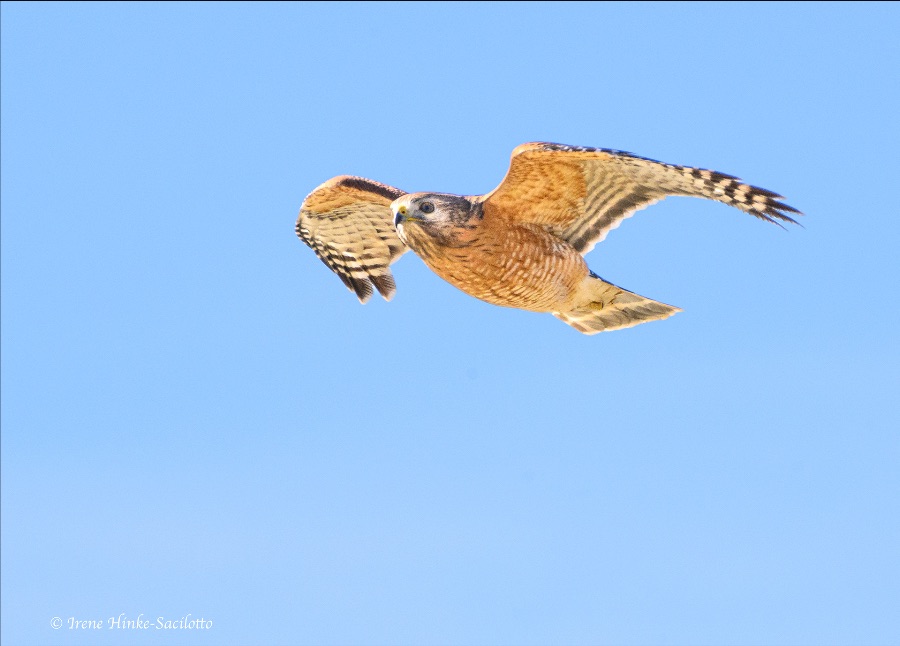 At Middle Creek there is a Visitors Center with interpretive displays, an auditorium, and an observation area with feeders and views of Middle Creek Lake. Also there are a number of walking trails, several picnic areas, a vehicle tour loop, and areas set aside for fishing and hunting.  During the peak of the fall migration of waterfowl, to reduce disturbance of the birds, portions of the tour loop are closed to vehicles.  However, from 1 March until 30 September, vehicles are permitted on the interior, northern part of the tour route.

The impoundment (lake) where the snow geese, tundra swans, and other waterfowl congregate was created by the construction of a dam in the early 1970s. It is quite shallow, with an average depth of only three feet.  Waterfowl attracted to the lake are those that prefer shallow water, compared to the diving ducks of the Chesapeake Bay. The deepest part of the lake is just above the dam where you might see herons, egrets and kingfishers. 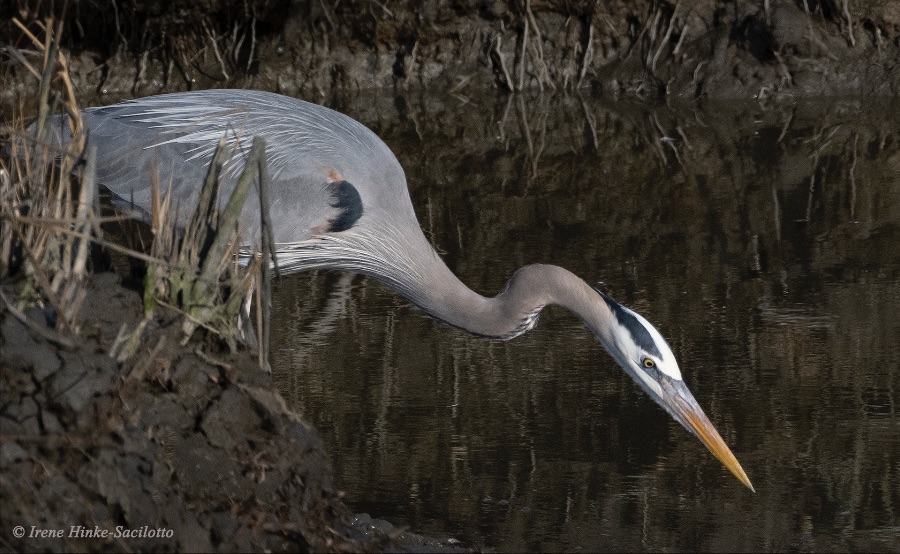 The Visitors Center pond during the spring and fall migrations is an excellent spot to observe at a distance mallards, black ducks, northern shovelers, ring-necked ducks, wood ducks, hooded mergansers and others. The “tree-house” type structure located behind the pond is a bat condominium intended to serve as a maternal colony for up to 6,000 bats. 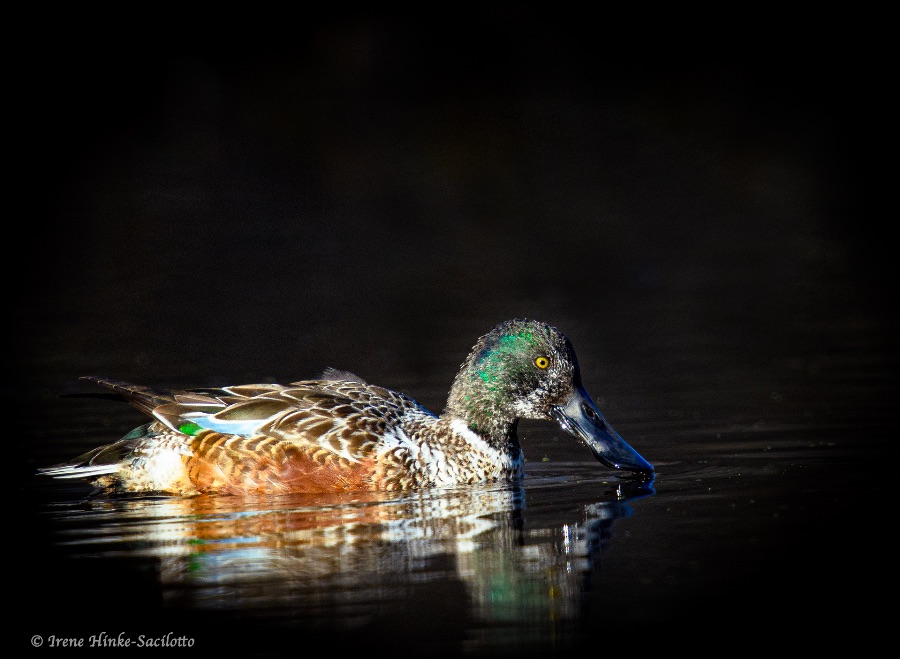 Just past the road to the Visitor Center along Kleinfeltersville Rd on the right is an open area with a relatively clear view of the lake.  When I was there, the cove was filled with snow geese in the morning and evening, with some at close range.  They shared the area with Tundra Swans.At times more geese joined the group filling the sky with birds before landing.  Eventually the main group of geese flushed and in mass, joined the other geese farther back in lake. To my surprise, the swans did not join them..  It may be a good spot to photograph flying geese at sunrise.  However, most visitors gather at Willow Point for sunrise. 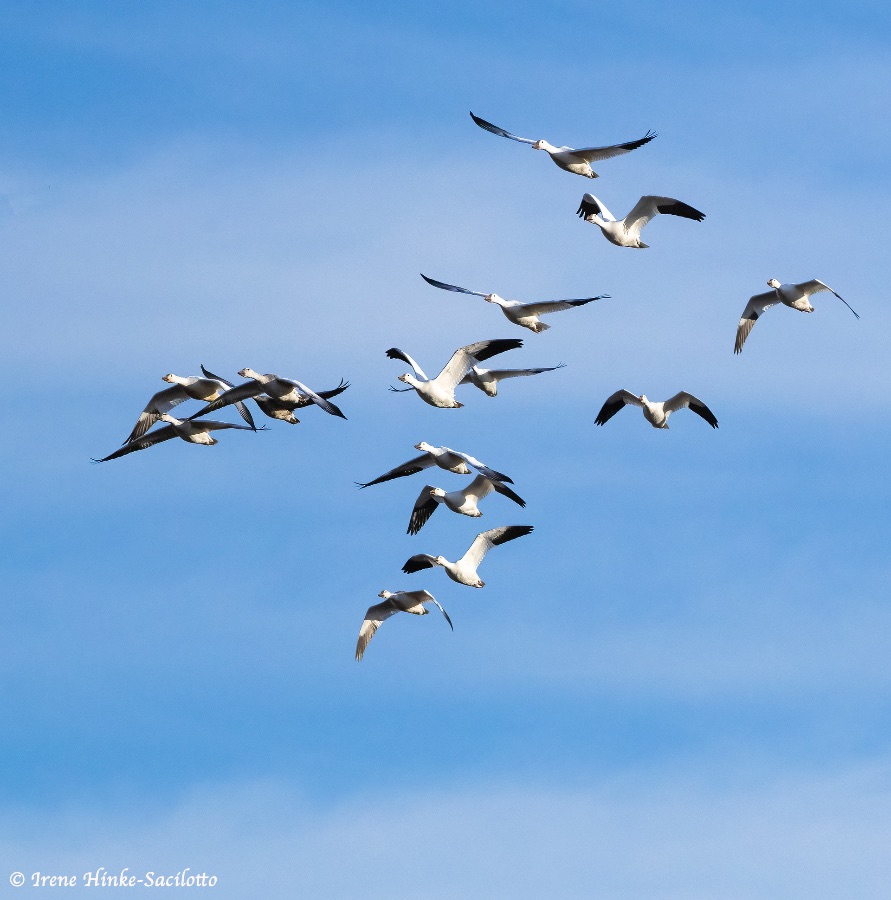 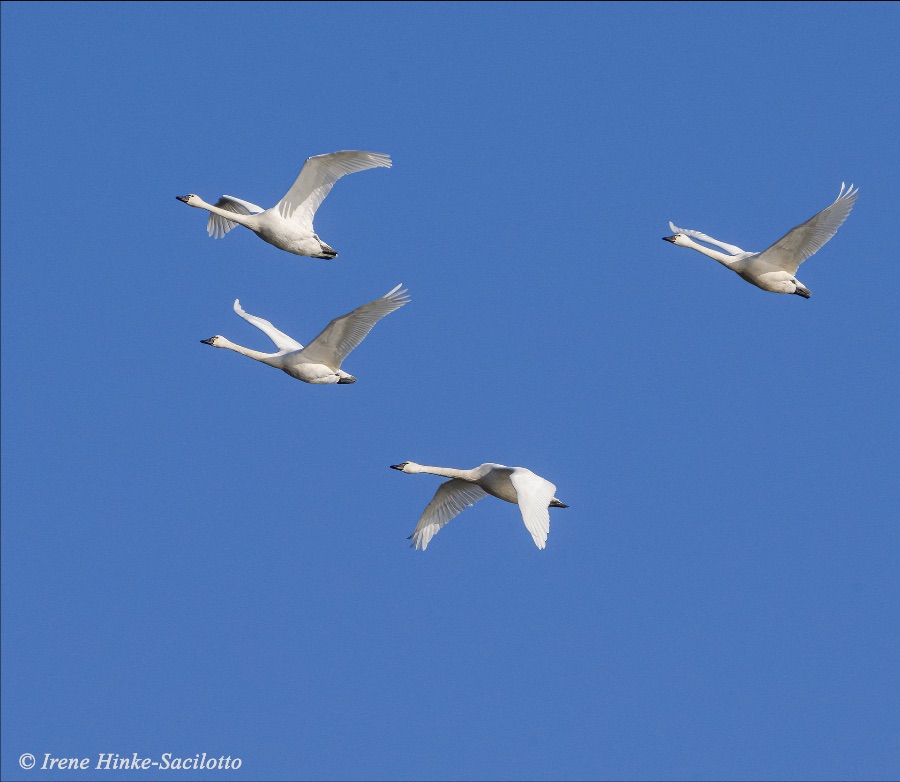 The Willow Point Trail is very popular when the geese are present.  It is an easy 10-minute paved walk that leads visitors to an observation point overlooking a large portion of the 360-acre lake. During spring migration, there are days when the waterfowl put on incredible flight displays, moving from one section of the lake to another.  Occasionally, they would fly over the head of visitors before circling back to the lake.   It was suggested that they took off in response to a bald eagle that left its perch on a dead tree across the lake and headed towards the flock. 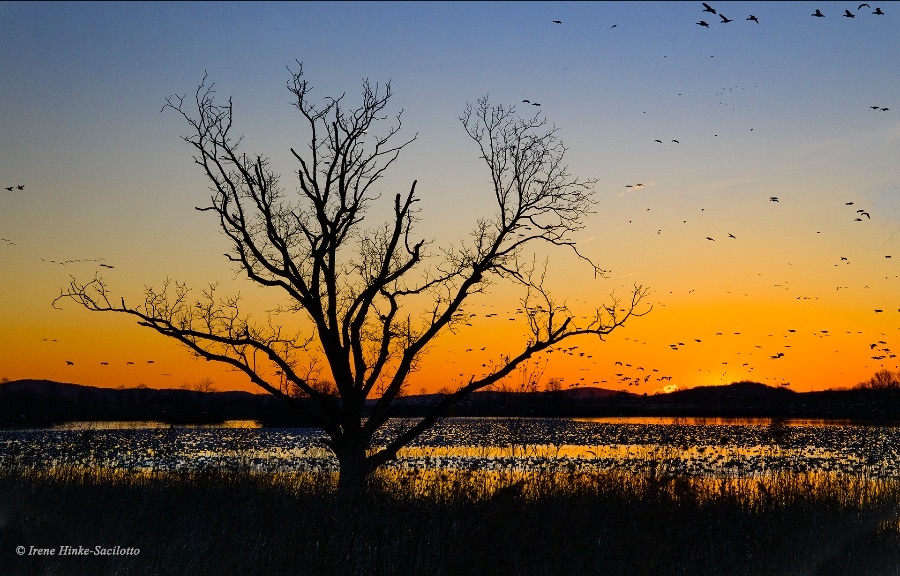 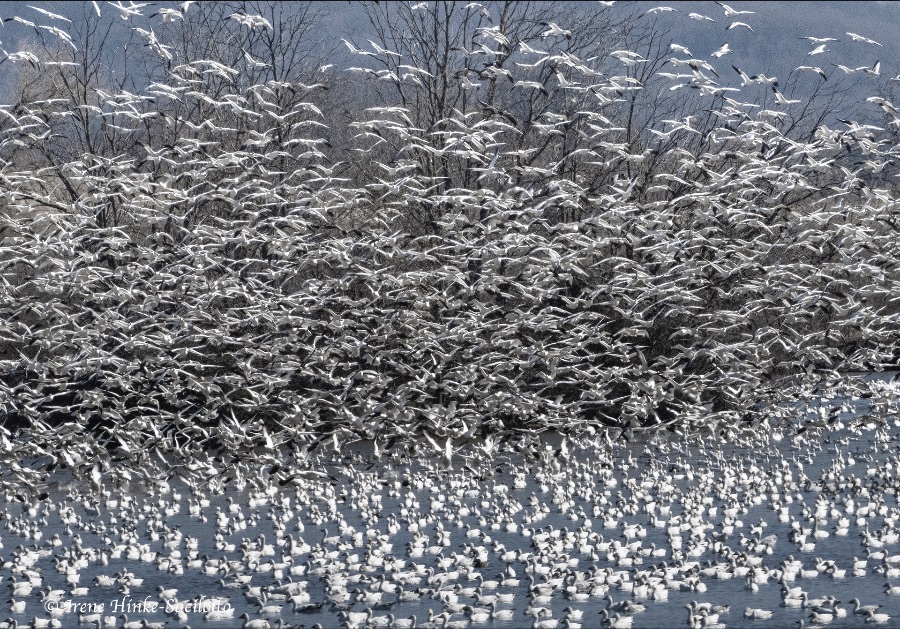 From the Observation Point Parking Lot past Willow Point, it is possible to see activity within the waterfowl propagation area which is off limits to people.  It is set aside to allow birds a place to nest, rest and feed unmolested year-round. In the spring and early summer you may see a variety of songbirds. Bird boxes attract tree swallows and bluebirds.  In the fields you may see bobolinks. 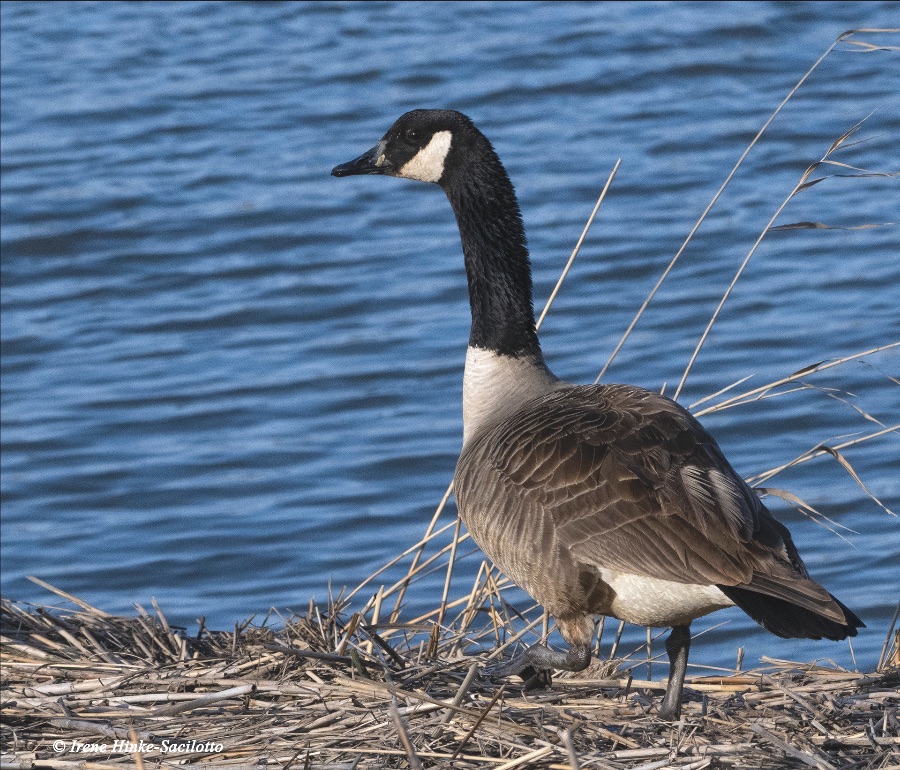 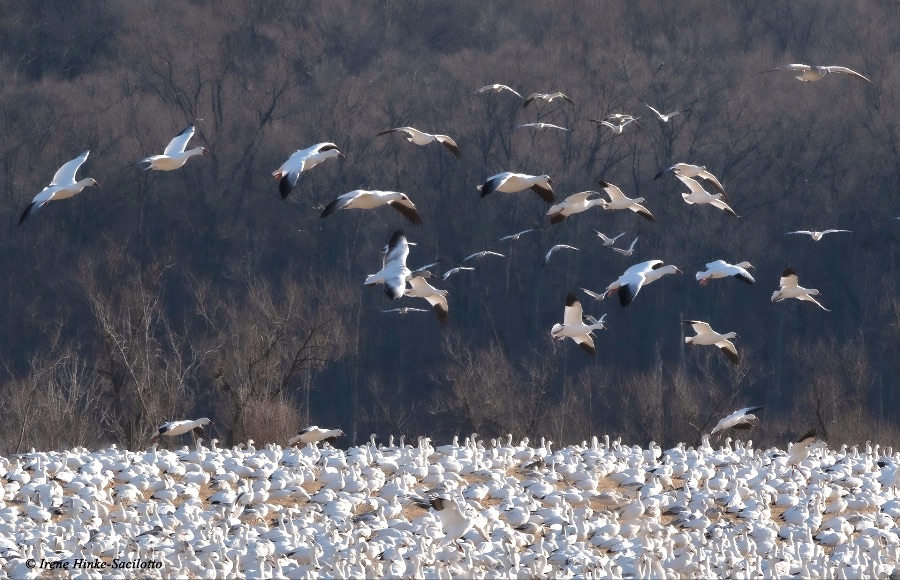 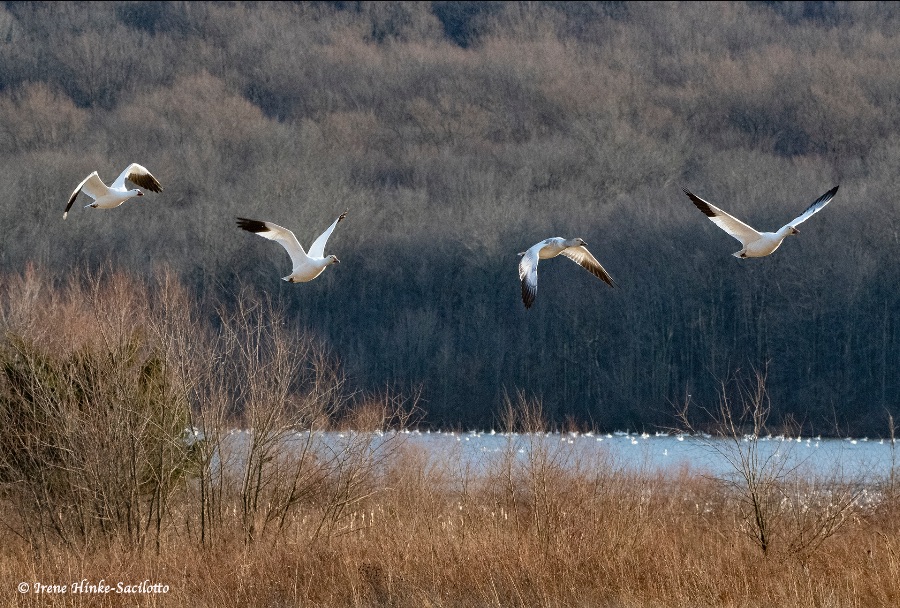 View from the interior loop road.

After observing the movement of geese from Willow Point and talking to other photographers, on my last afternoon in the area, I drove to the northern end of the interior tour loop where I thought the geese might be landing in a field close to the road.  There were a number of cars parked at the side of the road which suggested I was right.  I left may car at the end of the line and walked to where I had a clear view of the field and a number of geese on the ground. As I stood there photographing, other geese left the lake and joined the group.  More and more geese arrived with some on the ground taking off and flying overhead to a field behind me.  As sunset approached, the parade of geese leaving the lake continued with one  “V” formation after another heading in my direction. I had hoped they would pass in front of where the sun was setting but most did not.   However, I did capture a few images of lines of geese in front of the warm colors in the sky. 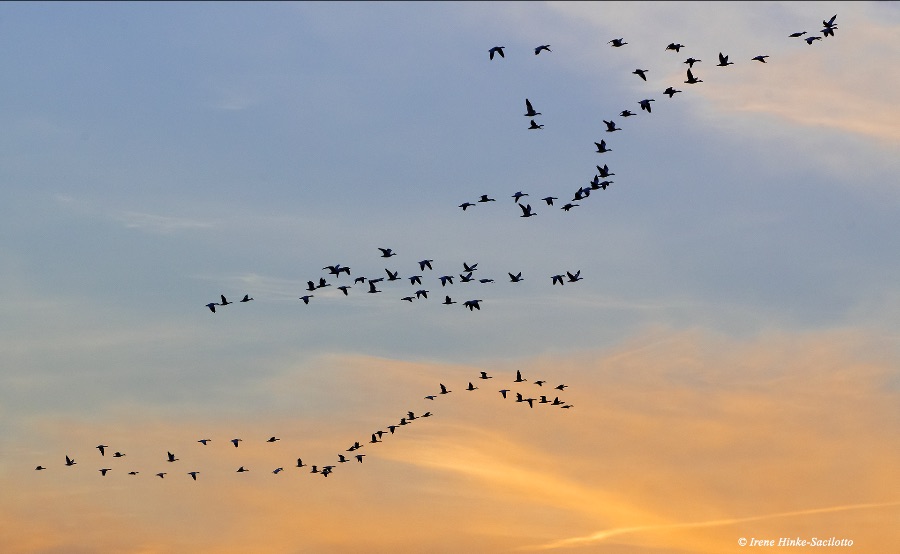